At first glance, a baseball field's layout might be intimidating.  But in reality is just a big square turned on a corner with a few arcs.  Check out this handy graphic below for a guide on baseball field measurements and layouts.  You can also see our Quick Facts About Baseball Field Measurements. 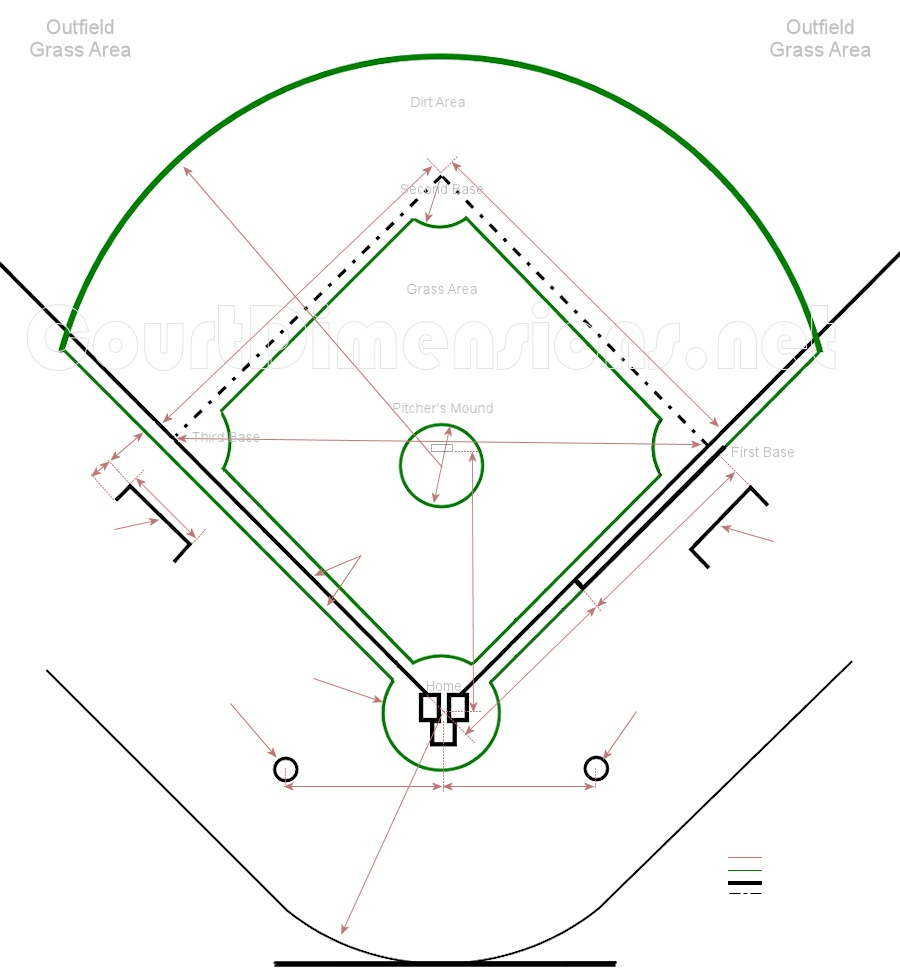 Q:  How tall is a pitcher's mound?
A:  10 inches above the field.  Pitcher's mounds are unique in that they have a greater slope on the second-base side than the home-plate side.

Q:  How far is it from the pitcher's mound to home?
A:  From the rubber on the mound to home plate it is 60 feet 6 inches.

Q:  How far is a home run?
A:  That depends on where you are playing.  Baseball fields are not uniform on home run lengths.  The vary from 300 feet to 435 feet.

Q:  How much area does a baseball field take up?
A:  Again this varies due to the home run fence distance, but you can fit a 120-yard football field inside most baseball stadiums.  The distance from the backstop to center field can be as high as 500 feet, or the length of 5 basketball courts.

Nothing signifies summertime in the United States more than the game of baseball.  Local journalists in the New York metropolitan area began calling the sport the "national pastime" in 1956, and the term has stuck ever since.  Despite scandals involving gambling and steroid use, Major League Baseball remains the second most popular sports league in the United States, ranking only behind the National Football League.  Unlike North American football, however, the sport is hugely popular internationally, particularly in Latin America.

Whereas other popular American sports such as basketball and football are fairly simple to trace in their origins, baseball's beginnings are a bit more ambiguous.  French bat-and-ball games similar to baseball can be traced all the way back to the 1300s, but the earliest known reference to the sport came in 1744 in a British publication titled A Little Pretty Pocket-Book, by John Newberry.  The book contained a description of "base-ball" similar to the modern sport, except played on a triangle rather than a diamond and featuring poles instead of ground-level bases.  The first recorded game of "Bass-Ball" took place in 1749 in Surrey and featured the Prince of Wales as a player.

The first known American reference to baseball came in 1791 in Pittsfield, Massachusetts, where a town law banned the game from being played near the town's new meeting house.  By the early 1830s, the game was reportedly being played in towns across North America, although it featured five bases and a rule that a batter was out if a ball could be caught after the first bounce.  As a result of these historical findings, the long-held belief that Abner Doubleday, a career United States Army officer and Union general in the American Civil War, invented baseball in Cooperstown, New York, in 1839 has been largely debunked by sports historians.

Today, the game of baseball is played around the world, with many American major league players coming from Japan, Cuba, and the Dominican Republic.  Canada's Toronto Blue Jays remain the only team located outside of the United States to win a World Series.  Still, baseball remains associated foremost with America.  The great poet Walt Whitman may have best summed up this relationship when he wrote, "I see great things in baseball.  It's our game - the American game.  It will take our people out-of-doors, fill them with oxygen, give them a larger physical stoicism.  Tend to relieve us from being a nervous, dyspeptic set.  Repair these losses, and be a blessing to us."