The graphics below depict most dimensions and measurements you would find on basketball courts.  You can also check out our Quick Facts About Basketball Court Measurements. 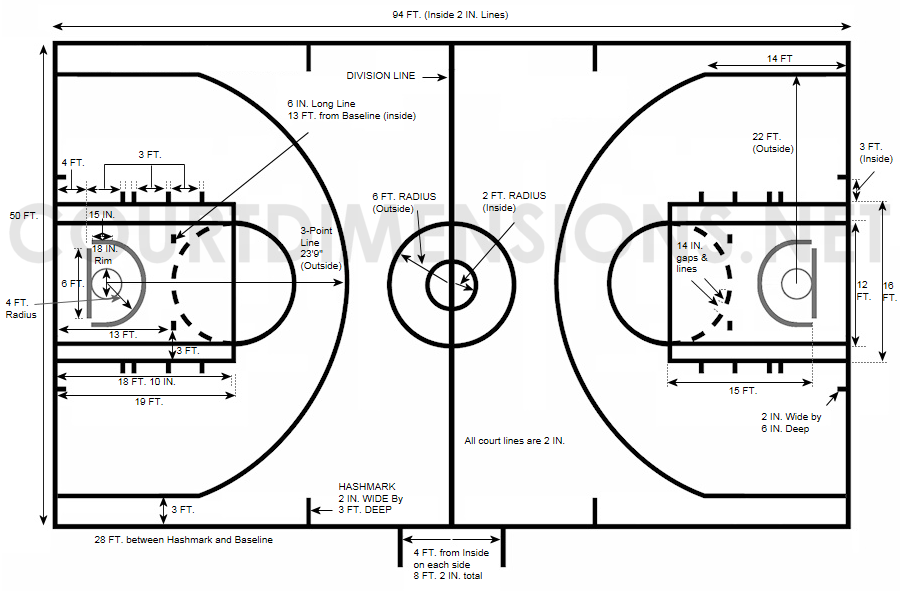 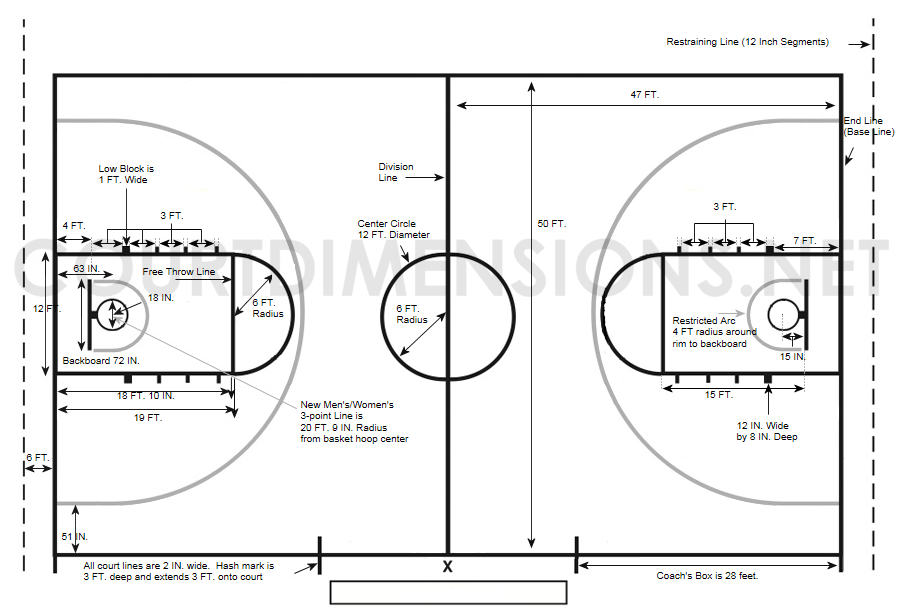 Q:  I heard the NCAA made some changes to their courts regarding the three-point line and the restricted arc area.  What are they?
A:  That is correct!  In 2015, the NCAA passed rules that expand the restricted arc area under the basket from three feet to four feet.  They also decided to move the women's three-point line back to the men's line - 20 feet, nine inches - so they are both the same distance from the hoop.

Q:  What is the restricted arc?
A:  Typically, it is defined as if a defensive player is inside or touching the arc, they cannot draw a "charge" or an offensive foul.

Q:  What's the size of the basketball hoop?
A:  18 inches across

Q:  How far is a half-court shot?
A:  Not 47 feet as you might think.  If you consider the backboard is 4 feet from the baseline, a half-court shot is 43 feet, unless you're on a high school court which would then be 38 feet.

The History of Basketball

Were it not for rainy days, the game of basketball might never have been invented.  In early December 1891, Dr. James Naismith, a Canadian-born physical education professor and instructor at the International Young Men's Christian Association (YMCA) Training School in Springfield, Massachusetts, was seeking some type of vigorous indoor physical activity to keep his students occupied when the weather turned foul outside.  After rejecting several ideas he deemed too rough or poorly suited to walled-in gymnasiums, Naismith took the first steps of creating the modern game of basketball by writing out a set of rules and nailing a peach basket onto a 10-foot-high elevated rack.

That first rough version of the sport was very different from the version we know today, and the equipment used reflected this.  At first, the bottoms were left in the peach baskets, meaning the ball had to be manually retrieved after each point was scored.  The bottoms were eventually removed, and the ball was poked out with a long dowel.  The first “basketball” was not even a basketball; it was a soccer ball.  The peach baskets remained in use all the way through 1906, when they were replaced with metal hoops and backboards.  The first basketballs produced were brown, and the orange ball that is so widely used today was not introduced until the 1950s.

The high-speed pace of the game fans are accustomed to today did not exist as well.  Dribbling was not originally a part of basketball, and the bounce pass was the only time the ball actually touched the floor.  When dribbling was finally introduced, it was hampered by the asymmetrical shape of the early balls.  It was not until around 1950, when manufacturing improved the shape of the ball, that dribbling became a major component of the game.  The first official game of basketball ever played reflects how far the game has come over the years.  It was played at the YMCA gymnasium in Albany, New York, on January 20, 1892.  The game featured nine players and ended with a score of 1-0.  The game was won on a 25-foot shot on a court nearly half the size of a present-day National Basketball Association court.

Today, basketball is a sport played around the world, both indoors and out, by people of all ages.  The game is huge internationally, with countries such as Argentina, China, France, and Italy naming it as their most popular sport.  It remains wildly popular in the United States as well, with high school basketball tournaments, NCAA “March Madness,” the NBA playoffs and finals, and even the Olympic games providing thrills for even the most casual of fans.  Dr. Naismith could hardly have envisioned what the game would become when he nailed that first peach basket up.  Not bad for just another rainy day activity.