Most football field dimensions are similar across different levels of competition.  Below is a graphic showing a basic football field.  We also have explanations below detailing the small differences between the high school, college, and pro ranks of football.  You can also check out our Quick Facts About Football Court Measurements. 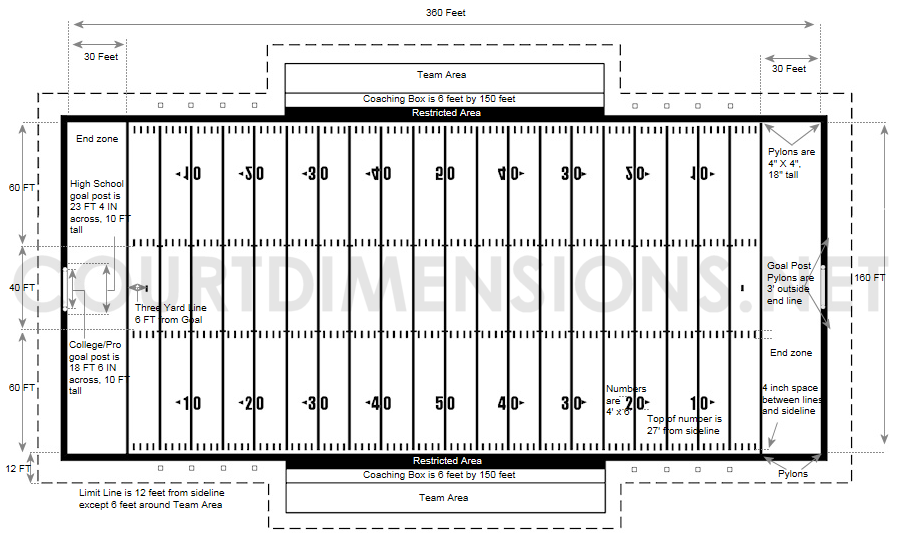 In professional football fields, the coaches and team's box dimensions may vary a little from college or high school.

Q:  How tall are the goal posts on a football field?
A:  At least 20 feet in high school, 30 feet in college and pro.

Q:  What is the limit line on football field?
A:  Typically the boundary for fans and/or media.

Q:  What size are the marks and lines on a football field?
A:  Typically 4 inches wide.

An Overview of Football History

North American (or "gridiron") football is the most popular sport in the United States today.  The National Football League's annual revenue dwarfs that of Major League Baseball and the National Basketball Association, America's two other dominant sports leagues.  It has the most participants of any sport at both the high school and college levels.  The Super Bowl is the biggest annual sporting event in the U.S., and college football rankings are always a topic of great debate every year.

Oddly, though, as popular as football is in the U.S., it is not played virtually anywhere besides North America.  In fact, in other parts of the world, the term "football" actually refers to what Americans would call "soccer." The sport actually originated from a combination of soccer and rugby, and the first official game of college football, played on November 6, 1869 between Rutgers and Princeton, reflected these origins.  It was not until the 1880s, when Yale rugby player Walter Camp began to change the rules of the sport, that North American football came to resemble the sport we know it as today.

That original game featured two teams of 25 players each, and the ball had to be kicked or batted with hands, feet, head, or sides.  The size of the teams was reduced significantly over time, down to the 11 players used on the field today.  The professional era of football officially began November 12, 1892, when William "Pudge" Heffelfinger was paid $500 to play a game for the Allegheny Athletic Association in a match against the Pittsburgh Athletic Club.  The NFL was formed in 1920 and established itself as the premiere professional league by 1922.

Parts of the world outside of the U.S. sometimes still refer to North American football as "gridiron." This term came from a description of the sport's playing field, which until the early 1920s was marked with a series of parallel lines in a checkerboard pattern, resembling a literal gridiron.  Even though the design of the field would change, the nickname would remain.  No matter what the sport is called, however, there is no denying that North American football is king of the hill in the U.S.