Besides recreational, unorganized softball, the most popular version of softball is fast-pitch, which can be found throughout the US with high school and college programs.  Below is a diagram for college and high school fast-pitch softball fields.  You can also view our Quick Facts About Softball Field Measurements. 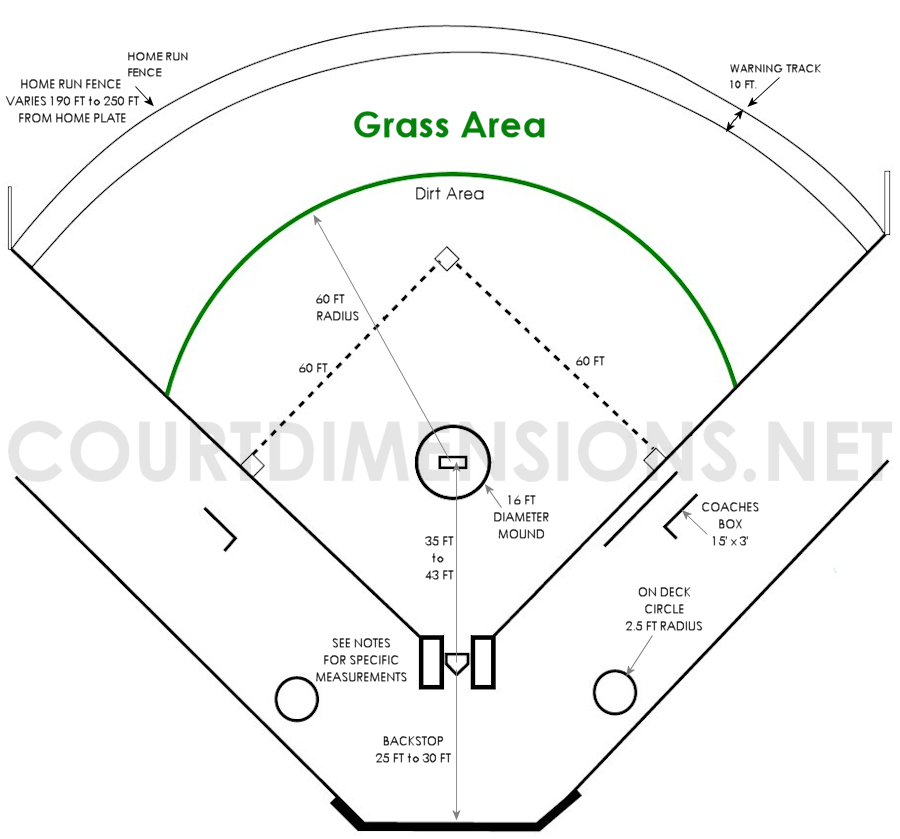 Q:  What are the different distances from home plate to the pitcher's mound?
A:  They do vary depending on age and type softball.  Here is a breakdown of the distances:

Q:  What are the dimensions of the home plate?
A:  The plate looks like an upside down house.  The two sides measure 8.5 inches and it is 17 inches across.  It points downward, and the side lines of the plate go in at a 45° angle at the 8.5" inch mark.  Basically the home plate is a perfect square with two equal triangles removed at the bottom corners.

The Evolution of Softball

Ever hear of "indoor baseball"? How about "mush ball," "playground," "softbund ball," or "kitten ball"? If not, you're not alone.  Most people know this particular sport as "softball," a variant on the game of baseball, played on a smaller field with a larger ball.  The name “softball,” by the way, was given to the game in 1926.

The earliest known game of softball actually arose from a humorous moment between fans of rival universities on Thanksgiving Day in 1887.  Fans of Harvard and Yale universities had gathered at the Farragut Boat Club in Chicago to hear the outcome of a football game between the two universities.  Once the score was announced and all bets were settled, a Yale alumnus threw a boxing glove at a Harvard supporter, who picked up a stick and swung at it.  The boxing glove was then tightened into a ball, and a broom handle was used as a bat.  That first contest ended in a score of 41-40!

George Hancock is recognized as the game's inventor after developing a ball and an undersized bat the next week.  Because the sport was originally envisioned as a way for baseball players to keep their skills sharp during the winter, it was called "indoor baseball." Interest in the game spread immensely after a tournament was held in 1933 at the Chicago World's Fair.  By the 1940s, fast-pitch softball had begun to dominate the game, but slow-pitch gained formal recognition in 1953 when it was added to the program of the Amateur Softball Association.

Women's fast-pitch softball was introduced as an Olympic sport in 1996, but the International Olympic Committee voted in 2012 to drop both it and baseball for that year's Summer Olympic Games.  Despite this, the number of NCAA Division 1 schools sponsoring women's teams continues to grow, and slow-pitch softball is still played on a recreational level all over the world.  So whatever it is called, softball continues to be a game enjoyed by millions.