Tennis court dimensions are universal is size.  Below is a diagram showing tennis court measurements and dimensions.  You can also view our Quick Facts About Tennis Court Measurements. 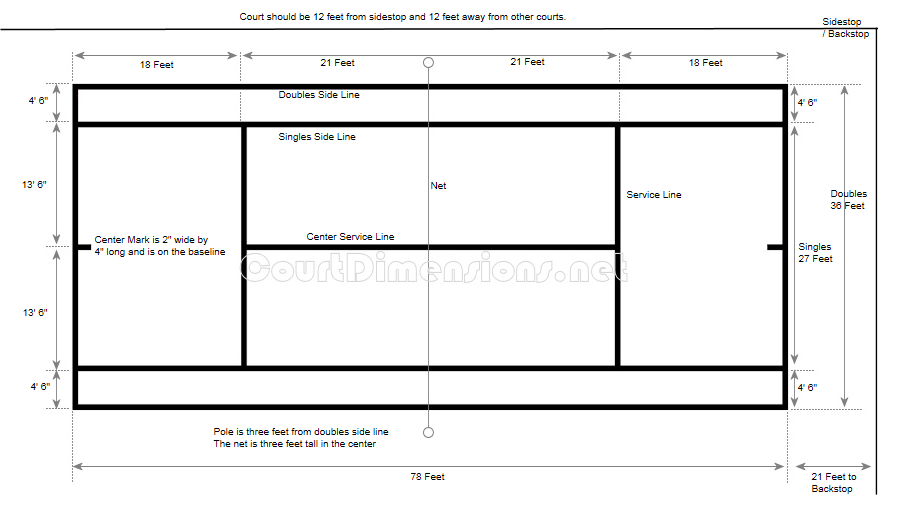 Q:  How tall should the net be?
A:  It should be on the ground and three feet tall at the center.

Q:  How far should tennis courts be apart from each other?
A:  A minimum of 12 feet.

Q:  How much space should their be between the court and the fence (backstop)?
A:  21 feet is the minimum recommendation.

Q:  How far is the pole from the sideline?
A:  Three feet.

The History of Tennis:  Yesterday & Today

Tennis is a sport played by people of all ages, on all levels of society.  Basically, anyone who can hold a racquet, even those in wheelchairs, can play the game of tennis.  It is played by millions of people recreationally, and it is a popular spectator sport as well.

The earliest origins of tennis can be traced back to 12th century France, where a game was played that involved striking a ball with the palm of the hand.  It was not until the 16th century that racquets began being used and the game began to be called "tennis," from the Old French term tenez, which can be translated as "hold," "receive," or "take." Tennis then was played largely indoors, and it was actually the invention of the lawn mower in 1830 which helped eventually move the sport outside.

Between 1859 and 1865, Harry Gem and his friend, Augurio Perera, developed a game which combined elements of racquets and the Basque ball game pelota, which they played on Perera's croquet lawn in Birmingham, England, United Kingdom.  Along with two local doctors, they founded the world's first tennis club in Leamington Spa in 1872.  Much of the credit for modern tennis, however, goes to Walter Clopton Wingfield, who patented a similar game in 1873 called sphairistikè.  He even produced a boxed set with a net, poles, racquets, and balls for playing the game.  U.S. socialite Mary Ewing Outerbridge purchased one of the sets and eventually helped bring the first American National championship to Staten Island, New York, in September 1880.

The four major championships in tennis today are referred to as the "Grand Slam." The Grand Slam consists of the Australian Open, the French Open, Wimbeldon, and the U.S. Open.  Apart from the Olympic Games, the Davis Cup, the Fed Cup, and the Hopman Cup, they are the only tournaments regulated by the International Tennis Federation (ITF).  Grand Slam tournaments are the only tour events which feature mixed-doubles play.  They also carry larger prize funds, are worth double the number of ranking points to the champion, and feature more singles players than other tournaments.

Tennis is played in every country around the world, making it the most universal sport in the world.  This universality and accessibility ranks tennis among the top five most popular sports around the globe.