Volleyball court dimensions and measurements are pretty easy to remember.  In fact, the most complicated part of the court is actually the volleyball net.  But we've got that covered, too!  Check out the diagram below or view our Quick Facts About Volleyball Court Measurements. 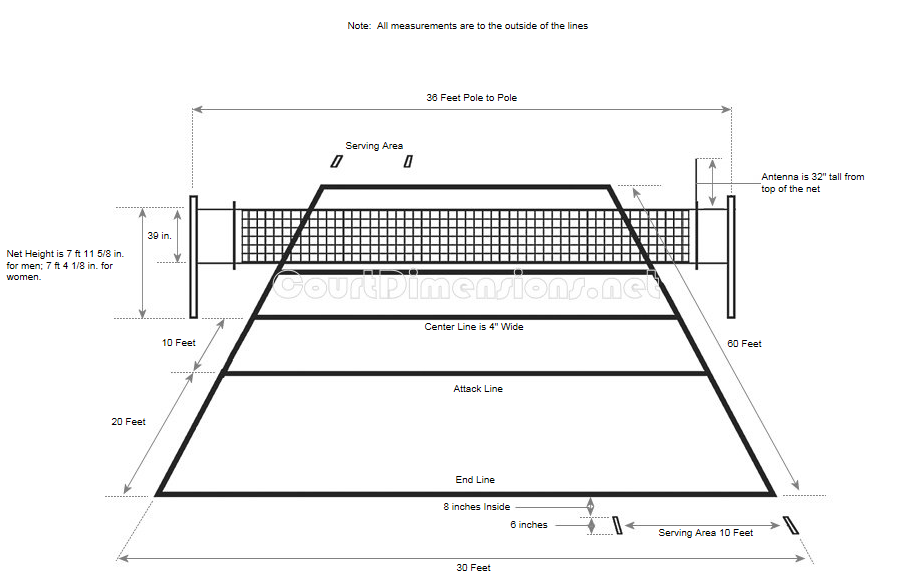 Q:  How tall are the poles that hold the volleyball net?
A:  They are 8 feet 4 inches.  Please see the dimensions above for how high the net should be off the ground.

Q:  What are the dimensions of a volleyball net?
A:  A net is typically 39 inches tall.  It is 32 feet long, which provides one foot of netting on each side of the court.

Q:  What is the dimensions of a volleyball court?
A:  60 feet long by 30 feet wide.  These measurements are to the outside of the court's lines.

Q:  How far is the pole from the sideline?
A:  Three feet.

Q:  How wide should the lines be?
A:  Two inches, except the center line is four inches.

A History of Volleyball

Whether it is being played on a sandy beach or inside a spacious gymnasium, volleyball is a thrilling sport to watch and tons of fun to play.  Few individual scoring plays in sports are as exciting as a spike in a volleyball match, but the sport also contains a team element that is crucial on both offense and defense.

While beach volleyball is immensely popular today as both as a pastime and a professional sport, volleyball was originally designed as an indoor sport by William G. Morgan, a YMCA physical education director in Holyoke, Massachusetts, in 1895.  In its original form, volleyball could be played by any number of players and incorporated characteristics from tennis and handball.  Morgan originally called the game Mintonette.  Matches consisted of nine innings, with three serves for each team in each inning and no limit to the number of ball contacts for each team before sending the ball to the opponents' court.  After its first exhibition match was held at the International YMCA Training School in 1896, Mintonette became known as “volley ball” and spread around the country to other YMCAs.

The first country outside of the United States to adopt volleyball was Canada in 1900.  Much of volleyball's international growth came in 1919, when 16,000 volleyballs were distributed by American Expeditionary Forces and their allies to people all over the world.  Team volleyball was established, with the number of players on each team limited to six.  Beach volleyball is played with only two players on each team.  The winning score of a game was changed in 1917 from 21 to 15 points.

Since appearing as an American demonstration event at the 1924 Summer Olympics in Paris, volleyball has provided more than its fair share of thrilling Olympic moments.  American players such as Karch Kiraly, Steve Timmons, Kerri Walsh-Jennings, and Misty May-Treanor have helped elevate the sport of beach volleyball through their Olympic success, while the team sport has seen several countries take home gold medals over the years.  According to some fan estimates, volleyball is the fifth-most popular sport in the world.  Simplicity and flexibility continue to be hallmarks of the sport, and volleyball seems poised to retain its popularity for years to come.